“Why can’t they try harder?”

I was seven, maybe eight, when I asked my dad this question at a New England Revolution soccer game. We were down a man after a cruel red card, and we were losing by a goal or two.

“I think they’re trying as hard as they can,” my dad answered.

I didn’t understand why they couldn’t just run a little faster, kick the ball a little harder, and communicate a little better. Why couldn’t the goalie jump a little higher to make that save? Clearly my childhood self had never tried as hard as she could at anything. After two marathons, I have worked toward remedying that situation, though I’ve never gone temporarily blind, peed blood, or projectile vomited on the inside of a brand-new company car after running 50 miles, as Dean Karnazes details in his hilarious book Ultramarathon Man.

I’m obsessed with the obsessives. I’m enthralled by their relentless focus on a goal and their intersection with tragedy—especially in the outdoors, where the margin between life and death is thin. I’ve been reading all the Himalayan climbing books I can find, and have recently branched out to polar explorers and extreme sports. Regardless of the geographical challenge named in the title, almost every outdoor survival story features doomed heroes who make a series of deranged choices to attempt just-short-of-impossible things for articulate reasons like “Because it’s there.” The suffering is constant and inevitable—fingers and feet lost to cold, teeth shattered on frozen granola bars, lovers weeping continents away—and all of it is optional. At (almost) any point, our doomed heroes could turn and hike toward safety. And yet they persist. There is something within that drives them forever forward.

I recently read The Ghosts of K2 by Mick Conefrey, about attempts to summit Earth’s second-highest mountain, and I was very disappointed by the first chapters—not one of the explorers dies. Everyone who approaches the mountain declares it unclimbable, and they go home. I took this frustration to my husband.

“No one’s died yet! I’ve been reading for over an hour, and nobody’s dead!”

He shrugged and said, “Maybe they should try harder.”

One of the later chapters in The Ghosts of K2 muses about this contradiction. Those who are driven mad by the dream of summiting—those who try the hardest—are the ones who are much more likely to end up dead. Unlike the first explorers, the later groups of climbers who come to K2 are better prepared, better equipped, and encounter death much more often.

When I visited the Polar Museum in Cambridge, England, I spent about three hours reading everything and looking at the sleeping bags and cutlery carried by long-dead explorers. I was struck by how many polar explorers died following their dream. If they didn’t die on the first expedition, they died on their second, or third.

Ernest Shackleton, famed for aborting his doomed polar attempt and saving all his men, told his wife, “I thought, dear, that you would rather have a live ass than a dead lion.” Among the most revered polar explorers, Shackleton was perhaps most prudent, but even he was ultimately killed chasing after his dream of the antarctic—by a heart attack in his ship’s cabin.

I wonder, sometimes, when I think about my potential future children, whether I would let my child play football. (This is a simpler scenario for me to contemplate than mountain climbing.) The head injuries can be catastrophic, and it is a brutal sport at almost all levels. However, if a dangerous sport is what brings my imaginary child the most satisfaction, happiness, and peace, could I deny them that? Anatoli Boukreev, an accomplished climber (killed in an avalanche) wrote, “Mountains are not stadiums where I satisfy my ambition to achieve, they are the cathedrals where I practice my religion.” But feeling the most alive and connected with the world while chasing such dangerous dreams doesn’t seem so different from other self-destructive pursuits—those that provide more commonplace, illegal highs. The major difference is that in our society, adventuring leaves the (alive) adventurer with some amazing stories, and perhaps enhances positive character traits like determination, confidence, and motivation.

I think that the allure of these obsessive adventurers comes from the fact that a tiny part of me gets it. There’s a 100-mile race near where I live, and part of me wonders what running for 24 hours would be like. It’s on a flatish circuit of about a mile, so I could drop out at any point without any repercussions except self-recrimination. But sometimes my husband talks about visiting Everest’s base camp, while I wonder about trekking to Concordia at the base of K2. I imagine looking up at mountain and sky.

We visited the Grand Canyon a year ago in the summer, and hiked several trails. One of the most memorable hikes was down Bright Angel and out to Plateau Point. Baking under the sun beside tiny green shrubs, cradled by the red Canyon walls, I felt so big that I’d made it so far, but also impossibly small in this desert of stillness. I wondered if we were going to fall 2000 feet to our deaths, or die of dehydration on the way back out. But I closed my eyes and listened to the rustle of tiny things and the rumble of the Colorado echoing up the Canyon.

We grew more adventurous on our third day at the Canyon and decided to hike to Dripping Springs. Bright Angel Trail is a luxurious highway in comparison to Hermit’s Trail, with Bright Angel’s water stops and lots of people to rescue you if things get hairy. On our hike to Dripping Springs, we saw no one. The unmaintained trail grew narrower and narrower, and rockier and rockier. On my right side was a thousand-foot drop. On my left side was red, crumbling canyonwall. After about a mile of this thin, winding path, I managed to keep my breath even, but my hands shook.

“We have to go back,” I told my husband.

Though he is the more gung-ho of the two of us, he nodded, and we turned around. Instead of reaching Dripping Springs, we headed to Santa Maria Springs, where we found the Restbit Bench. 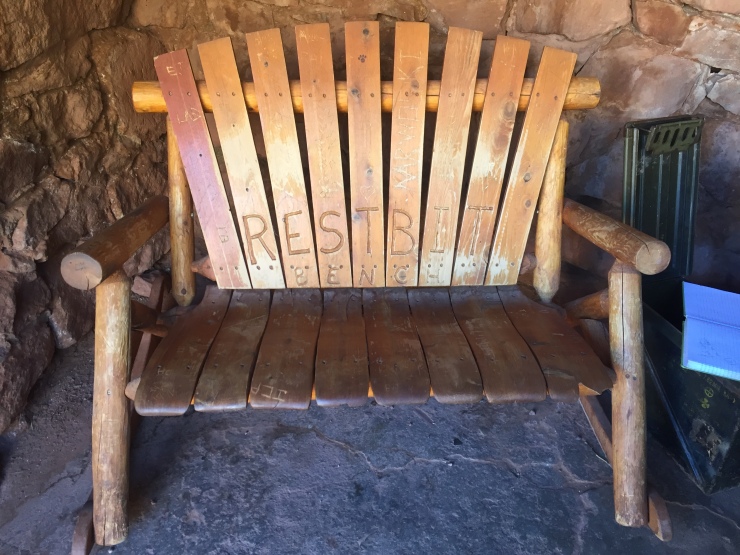 After returning—alive—to our hotel room and looking at more topographical maps of the Canyon, my husband thinks that we were almost past the worst of it. But we spoke with one of the rangers earlier in the week. “Don’t get cliffed out,” she said. “Don’t go too far out that you can’t safely go back where you came from.”

I saw this motivational phrase on a t-shirt recently: “I didn’t come this far to only come this far.” I liked it. I still like it. It’s a good, sturdy phrase. But the thing is, you don’t just have to go far. You have to get back, too.

Unlike mountain climbing, polar exploring, and running hundreds of miles at a time, there is little physical danger inherent in writing. It is unlikely to cause kidney failure or cerebral edema. But it has its own urges and its own insanity. Writers do the same thing over and over again, hoping that the actions might build, that our work might lead to some sort of (at least temporary) summit, before we ask ourselves, “What’s next? Where’s the next challenge?”

And like outdoor obsessives, writers have to know when it’s just not going to work. When the weather is too bad, or we’re not prepared enough, and we have to abandon a project—at least if you make it home, you can always come back to the attempt later.

Summer is a great time for adventuring—whether it’s exploring a new trail, or writing the next manuscript. I’m trying pretty hard, but I’m trying not to try so hard that I can’t try again later.